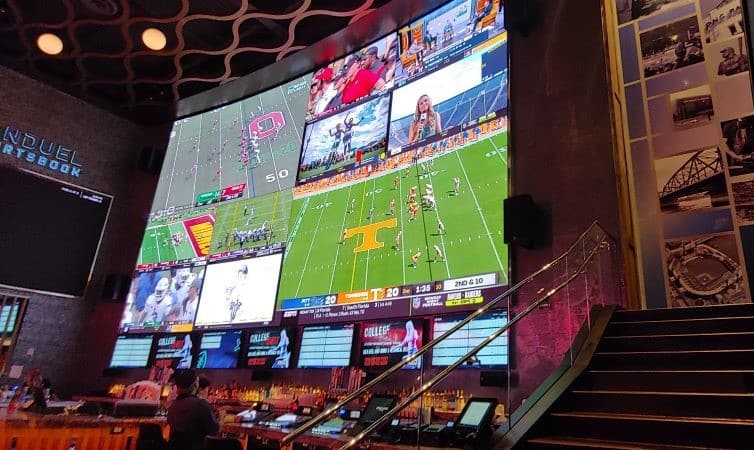 The 18 retail sportsbooks in Pennsylvania don’t get as much attention as the 14 online/mobile sites on which to place sports bets.

After all, the bets placed in person at 15 casinos and three off-track betting parlors represent only 8% of the overall wagering volume. These brick-and-mortar venues aren’t heavily promoted on television and social media the way the FanDuels and BetMGMs of the world are.

But the casino operators count on them to attract customers, create excitement within the property, and, yes, even raise a few dollars to help keep the bright lights on 24/7. The latest report from the Pennsylvania Gaming Control Board that showed record volume of $797.1 million in overall sports betting last month included $64.8 million in bets placed in person, generating $6.1 million in revenue for the casinos (compared to $65.1 million grossed by online sportsbooks).

And a deeper look into the numbers showed some interesting tidbits of information:

A few of the bigger sportsbooks stand out

Many retail sportsbooks in the 15 Pennsylvania casinos that provide them (Lady Luck Nemacolin is the only one that does not) look alike, with their large-screen TVs, comfy lounge chairs, digital odds boards, ticket counters, and betting kiosks. But their level of activity varies widely.

Although Parx Casino is the state’s largest venue, the Rivers Casinos in the heart of Philadelphia and Pittsburgh and Live! Philadelphia in the city’s stadium district draw by far the most betting action. And it was Live! that drew upon its location — with thousands of Phillies and Eagles fans frequently swarming by it — and really took off in October.

Bryan Newman, manager of the Live! sportsbook, which partners with FanDuel, told Penn Bets in late October that the book was on pace to set a new betting handle record for the state’s retail operations, and he was not off. Its $10.05 million bested the $10.02 million that Rivers Pittsburgh handled last December. That volume was 71.2% more than the Live! sportsbook’s activity in September, whereas retail betting statewide was up 33.6% and overall betting in the state increased 23.5%.

October sportsbook activity is always higher than in September and among the highest of the year — the $62.2 million wagered in person in Pennsylvania in October 2021 was the retail sports betting record until last month. That’s due to heavy football volume, postseason baseball, and the start of the NBA and NHL seasons, and this year the month included five full weekends of games. For Live!, add to those factors the benefit it received from the unexpected runs by the local teams.

While its hold percentage of 9.3% was just below the 9.4% among all the state’s retail sportsbooks, the abundant activity at Live! managed to drive its revenue up 36.2% month over month — from $684,923 to $933,102 — when most sportsbooks actually made less money than in September because their drop in hold percentage (meaning bettors were more successful) outweighed their increased betting volume.

At Parx, for instance, its 9.4% hold percentage mirrored the statewide retail number for October, and betting handle increased a healthy 44.8% between September and October, reaching $9.4 million. Its revenue from losing bets dropped 28% between the two months, however, to $880,356 (still a robust figure by standards of the state’s retail sportsbooks).

A different story to the west

Every other retail sportsbook in the state climbed more in activity between September and October than Rivers Pittsburgh, which is located an easy walk from the Steelers’ Acrisure Stadium. (The Steelers played two home games in October.)

The betting handle at Rivers Pittsburgh increased just 1% to $8.01 million for the month. Its hold of 14.1% was the third-highest in the state, however, and its revenue thus grew 35.3% to $1.13 million, which was more than that of Live! or any other venue.

To a lesser extent, the same dynamic took place south of Pittsburgh at The Meadows, where the sportsbook underwent a $7 million renovation this year with rebranding by PENN Entertainment as a Barstool Sportsbook.

Its handle increase to $2.1 million between September and October was just 7.1% — better than only Rivers Pittsburgh — but its revenue jumped 12.4% to $232,942 in a month in which revenue declined on a monthly basis for most operators, even though they were still in the black.

All those Steelers bettors in western Pennsylvania seem like one very possible explanation, and as potential case exhibit No. 1 for the east-versus-west difference: the cross-state rivalry game of Oct. 30 in which the Eagles defeated the Steelers 35-13. That lopsided game would presumably have hurt the Philadelphia area sportsbooks while boosting the fortunes of Rivers Pittsburgh and The Meadows.

And then there’s the very unusual case of Live! Pittsburgh, the mini-casino in Westmoreland County that is a sister operation of Live! Philadelphia and also features an on-site FanDuel sportsbook.

The sportsbook there took $1.36 million in bets in September, a modest amount that makes sense for a casino its size, as the Hollywood mini-casinos in York and Morgantown saw even less action that month.

Those other mini-casinos saw handles jump in October like the rest of the state, but nothing like what occurred at Live! Pittsburgh. Its handle more than tripled to $4.78 million, putting it far above much bigger casinos like The Meadows and Harrah’s Philadelphia.

The kicker, however, was that Live! Pittsburgh was the only retail sportsbook in the red for the month, reporting a loss of $283,320. So some bettor or bettors evidently placed some very large sums directly at the location in Westmoreland Mall, and he or they did very, very well.

It would be a surprise if that occurs again in November, but then again, no one expected the Eagles or Phillies to do so well and boost its Live! Philadelphia counterpart so much in October either.